Amy Coney Barrett Disqualifies Herself with Not Answering Questions of Peace 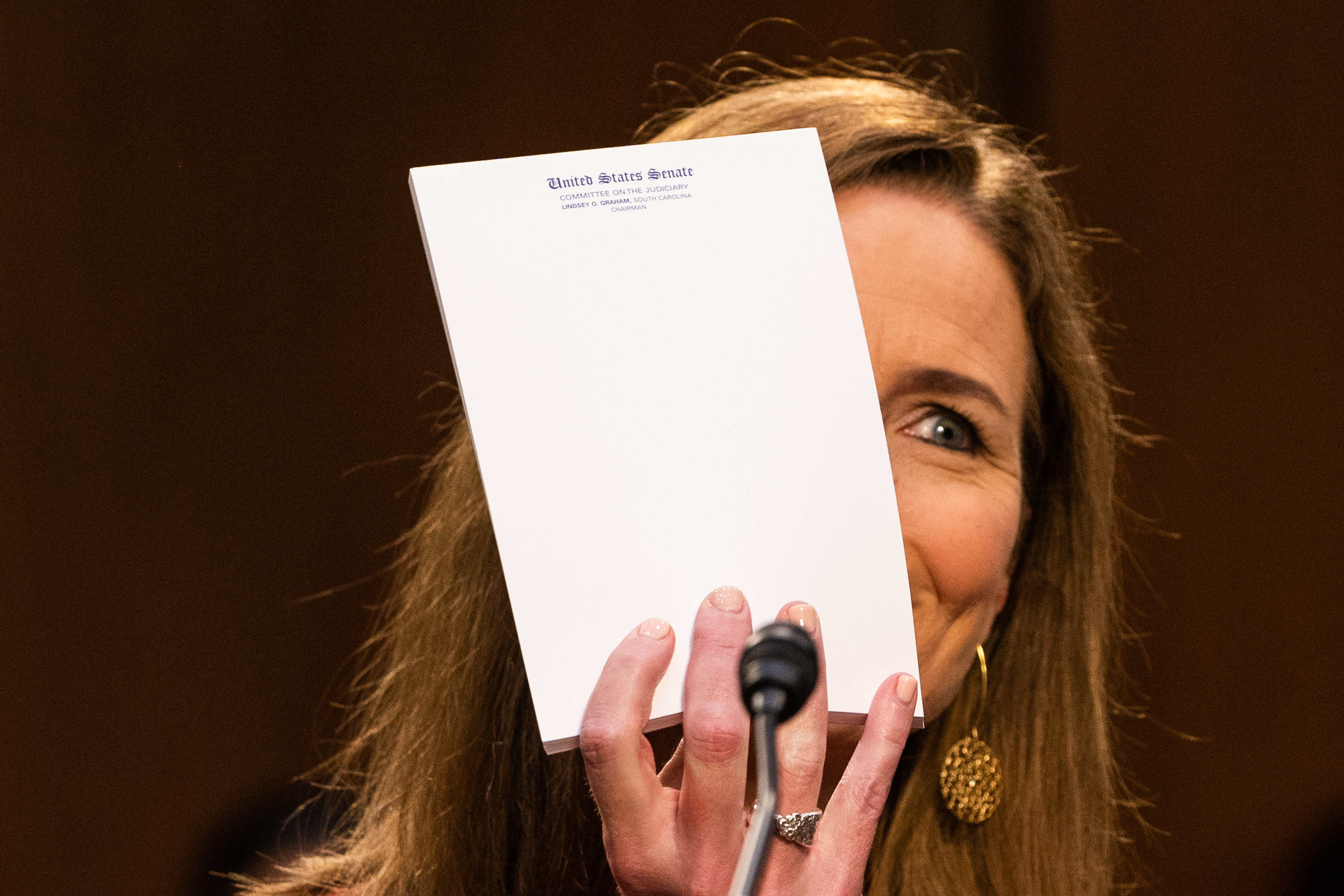 When Senator Corey Booker asked Amy Coney Barrett if she believed in a peaceful transition of power, Barrett refused to answer. WTF? IT’S Stunning. That answer makes her unqualified to preside over an otherwise peaceful democracy; Barrett is a threat to the union.

This entire supreme court hearing must be a charade. There was a time this statement alone would have overwhelmingly disqualified her to 90% of the Senate.

This is similar to Trumps response when he was asked to denounce racism. He could not do it. Neither could Barrett. Amy Coney Barrett would not respond to a peaceful transition of power. HER SILENCE spoke loudly indicating solid Trump loyalty. Who could possibly imagine a Supreme Court nominee not answering such an easy question? It almost appeared as if she was speaking directly to Donald. Perhaps she was.

Barrett is young and naive in a sheltered way and a real life hand maid. She may read and write well, but her thoughts emanate from a bubble that resembles a cult. I am a Catholic, but according to years long witnesses, her Catholicism is not normal and is cult-like. The witness who appeared on Democracy Now described the scary leaders of this Amy Coney Barrett Catholic cult to be like the Jim Jones cult (sans the poison). That is scary! Video below.

Barrett has no trial experience. Just pundit-ness. In terms of experience she has NONE. Barrett has never had a trial. Not one single trial experience under her skirt. That’s not supreme; it’s unskilled and mediocre at best. It’s like promoting a General who never had a fight (but wears medals) to lead and advise battle hardened veterans. In the end that General will nullify the entire fighting force. In a similar way Barrett will nullify the credibility of justice and we the people can move to strike every (federalist society based) trial before it ever reaches any Trump judge with juror nullification.

Sheldon Whitehouse outlined a mafioso style organization that has spent 250 Million dollars from completely unknown sources (could be Putin) to rewrite our justice system. Mitch McConnell held up almost all Obama judge appointments and handed them to Trump and the Federalist society. The Federalist Society has taken ownership of our American justice system by appointing 300+ Federalist Society judges. So the system has now been poisoned with corruption. Under Trump appointees all justice will be metered as partisan authoritarianism.

Sheldon Whitehouse effectively prosecuted the entire Republican party demonstrating the Republican party acts like a criminal organization with no interest in governing people but only in acquiring power in a corrupt way. He said he would have loved a jury to be listening! Had a jury been listening to him the entire republican party would be convicted as a criminal organization and dissolved. And 300 – 500 judges would be impeached with one stroke of the pen. Maybe more. That’s how poisoned the Justice System has become in just 4 years.

These 300+ Trump appointees are not justices, but rather partisan pundits that were placed on all of our courts with dark money. Our system will not work as intended. Thomas Jefferson warned us this could happen. So maybe Americans will take charge and practice more juror nullification. Boycott companies that support authoritarianism – when you have them by the balls their hearts and minds soon follow.

Barrett must be soundly defeated before she dismantles justice and civil rights. The Supreme court has only expanded civil rights and never taken them away. Reducing human rights would be the end of their supremeness. The democrats must find 3 honest republican senators – or else we’ll just impeach her. She lies and misrepresented her position on the ACA and has 3rd century view of a progressive world.

FOOTNOTE: Every day it becomes even more apparent this will be the generation to lose our democracy. It’s like watching a bunch of little lambs lecture wolves as they are chewing on your family. The fucking democrat wimps are losing our democracy because they bring chewing gum to gun fights. We need to get rid of these chewing gum democrats and bring in the big guns; ass kicking progressives who will fight back tooth and nail. The gloves are always off with Senate and House republicans. The democrats cannot fight like its life and death but republicans can and do. Maybe this final grab for power will teach the Democrats a lesson. Who The Fuck Do You Think You’re Talking To?